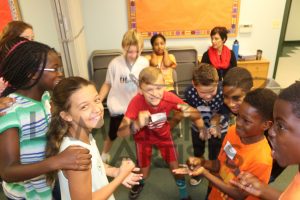 Whoops, it’s not even Wednesday but the kids are more than ready to paarrr—taaayyy at the Friday night show! Scripts were given out, lines were memorized and dances were performed with tons of energy. Today held the battle of rock, paper, scissors. The competition was intense, lively and still friendly. Champions were announced and celebration flooded all over the theater game arena.